Speak Before You Think - Palace Hypnotherapy 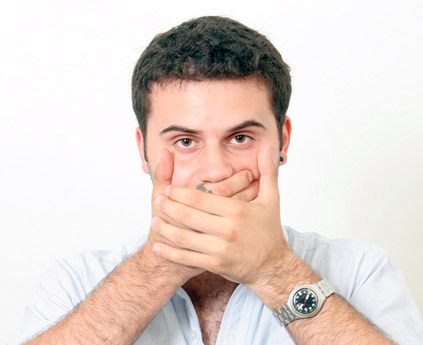 Think before you speak, we are told. It’s a rule drummed into us from infancy, alongside other gems such as i before e except after c – a rule to which weirdos named Keith must feign indifference. There was a time when it was widely believed small children should be seen and not heard, a woman’s place was in the kitchen, and the stiff upper lip reigned supreme. Is it any wonder that in the time these Victorian values were most stridently championed, prostitution and opium addiction were rife?

So why should we think before we speak? In case we cause offence, perhaps. For fear of sounding stupid or ill-informed. Because as we all know, there is nothing in the world that’s worse than being wrong. Is it possible that this piece of good solid common sense is in fact one way path to social anxiety and emotional inhibition? Could the truth actually be enough to make the skin of the typical Englishman crawl?

Maybe so. Andrew Salter, the behavioural psychotherapist, encouraged his clients to flip this notion on its head. ‘Speak before you think’, he advised. Now there’s a concept. My clients invariably baulk at the idea, generally because they are the most in need of adopting it. They want to be like the client Salter quotes in his book, Conditioned Reflex Therapy, who is ‘the only man in LA with 500 close friends.’

Social anxiety occurs when our focus is internal. It stems from a failure to engage with what is going on around us, instead engaging with our own internal narrative. This is self-consciousness. When we are relaxed in a social setting – making conversation, dancing, laughing – we respond to our environment. Taking cues from the people and things around us, we navigate the world with fluency and ease. We act in accordance with our emotions, and that emotional freedom allows us to experience a sense of authenticity. The moment we begin passing it through the filter of thought, troubles arise. Doubts creep in. Was that the right thing to say? Does X think I’m an idiot? Should I go over and speak to Y? For fear offending others we sin against ourselves.

One client argued that speaking before he thinks is how he agrees to doing things he doesn’t want to do. I asked him if that was really true, using a specific example – in this case, going to the park with someone when he had other plans. When he examined it in greater depth, he realised that his emotional response was no, but in the few microseconds between feeling that response and communicating it, notions of propriety imposed themselves. He persuaded himself it would somehow be rude or inconsiderate not to put himself out to satisfy the request of another. And that’s all it was. A request. It wasn’t a crisis or an emergency – simply that someone wanted some company on an outing.

There’s nothing wrong with being kind. It’s great thing to be. But be kind because you want to be, not because you have to be. Otherwise, somewhere down the line, you will pay the price with your mental health. And being direct is not being rude. Expressing your preference is a perfectly reasonable thing to do. As is showing your emotions. All else is repression.

That is not say that we should not be capable of exercising discretion. In a work environment it may not always be politic to tell your clients exactly what you think, although you may be surprise how many times that might actually solve a perceived problem. The issue comes when discretion becomes the default setting, and rather than responding freely and authentically to the world around us, we check our impulses and repress our emotions in the interests on some false notions of propriety.

So try it. Speak before you think. See how it feels to slip off the strait jacket and say what you really think. You never know. You might just like it.