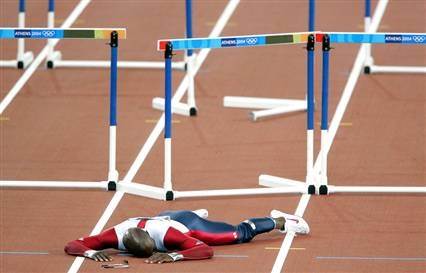 No one doubts that failure stings. We all have our litany of personal defeats that testify to this. But does failing make us failures? It can feel like this in the moment. Rather than see it as an action (‘I failed’), the temptation is to turn it into an identity (‘I am a failure’). We hobble ourselves with perfectionism.

In her book Mindset, Dr Carol Dweck summarises several decades of her own research into the nature of achievement and success. She argues that talent and ability are over-prized; it’s the way we perceive ourselves that holds the key to overcoming obstacles.

Dweck presents two possible mindsets – fixed and growth. In the fixed mindset, our personal attributes are viewed as static and unchangeable. It becomes a rationale for avoidance. After all, why bother pushing ourselves if it’s just a fast-track to failure? Isn’t it easier to say ‘I’m bad at sport so I don’t bother with exercise’? Or: ‘I’m not very smart, so there’s no point in reading.’ Or: ‘I’m a weak-willed person, so there’s no point my trying to give up smoking.’ The fixed mindset allows us to use our experience of failure as a comfort blanket to inure us from ever feeling its sting again.

The growth mindset views obstacles as a pathway to self-improvement. It promotes the idea that through hard work and perseverance we can improve at anything, even in seemingly innate qualities such as intelligence. It recognises that every overnight success story the product of many hours of hard graft behind the scenes, and countless failures along the way. Just because successful people make things seem effortless, we mustn’t be fooled into believing they are.

Won’t Someone Please Think Of The Children?

Dweck’s model has been particularly key is in developmental psychology. She discovered that praising children a certain way (‘you’re so clever’) often makes them form an attachment to the self-image this creates, resulting in a fixed mindset. Should something come along that threatens this self-image, e.g. a tricky new challenge, a child will often prefer to fail by not giving her best, rather than giving it her all and risking the same result. If she gives her best and fails, the reasoning goes, perhaps she’s not so clever after all?

While such logic may seem ridiculous when parsed, our egos are terribly fragile. We use all manner of strategies to protect them, even if many are ultimately forms of self-sabotage. The solution, Dweck suggests, is to focus on the process. This chimes in with the wisdom of the Stoics, who advocate paying attention only to what you can control, and accepting what you can’t. Praising a child for her efforts (‘I appreciate all the work you have put into this’) rather than her abilities will encourage her to attribute any success to her striving rather than her innate gifts. This position is ultimately far more resilient, and less likely to end in meekly waving the white flag.

It’s part of my job to encourage the growth mindset. When clients come with fixed ideas I ask them what evidence they have for holding that position. I point out that just by coming to see me they recognise the potential for change, and by booking the appointment they have demonstrated the courage to accept a challenge, to strive for positive change in their lives rather than accept a mediocre status quo. To stop avoiding a problem and instead face it head-on, cognisant of the fact that ‘success grows in the garden of failure’.

And regardless of how much I’d like to say otherwise, no therapy carries with it a guarantee of success. But if we treat every failure as an act of learning, we always end up richer for the experience. In the words of Samuel Beckett – ‘Ever tried? Ever failed? No matter. Try again. Fail again. Fail better.’

It’s only by giving ourselves permission to fail that we give ourselves the chance to succeed.